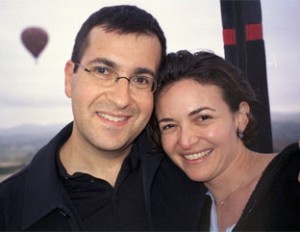 Facebook executive Sheryl Sandberg recently gave a moving tribute to her husband who died: “Dave was my rock … We had 11 truly joyful years of deepest love, happiest marriage, and truest partnership I could imagine.”

The Guardian newspaper reported that President Barack Obama extended his sympathies to Sandberg and in a signed post on the White House Facebook page said: “His (Goldberg’s) skills as an entrepreneur created opportunity for many; his love for his family was a joy to behold, and his example as a husband and father was something we could all learn from.”

Sheryl’s words, posted on Facebook, are very moving. They clearly had a good marriage: “He gave me the experience of being deeply understood, truly supported and completely and utterly loved.”

How would you describe your marriage?

If you’re not married, but would like to be, then what kind of marriage do you want to have?

If you’re in a long term relationship, what holds you together?

I would say that we have a marriage that is an equal partnership. We are best friends and our relationship is one of deep intimacy at many levels; emotionally, physically and spiritually. I know that my husband, Mark, is FOR me. He tries to bring out the best in me, even when I’m being hormonal, unreasonable and …a cow!

These days I would describe Mark as my rock.

There were many years when I would have described him as …gravel! Truly …unconsolidated fragmented rocks!

After three years of romantic attachment we had a fairy-tale wedding. The first year of marriage was difficult. This was followed by lots of ups and downs for about seven years. On the surface we were a successful couple with a nice house, friends, holidays… But underneath we were both unhappy. I felt lonely. We didn’t seem to talk about anything that mattered. There were lots of tensions due to unresolved conflict. And I think we both filled the empty spaces in our relationship with work. We were gradually drifting apart.

Then we became parents. The torture of sleepless nights and post-natal depression fuelled the marriage problems. I started to question everything. And then I was offered help and support by a local vicar (even though we weren’t churchgoers).

Sometime later I decided to go on a spiritual journey to find out who Jesus was and to cut a long story short I found myself under a duvet one day saying a little prayer to God asking Him to be part of my life. I was surprised by the joy that appeared in my life …and peace …and feeling love pouring into me from something outside of myself (yes, I know that sounds mysterious, but it’s the best way I can describe it). My new found faith in Christ changed everything for me.

At first Mark thought I’d gone mad. But he could see that I had changed and he rather liked the ‘new me’! He said that I was much more loving and unselfish. The ‘old me’ would have reacted, but the ‘new me’ didn’t even flinch.

I did want to tackle some of our marriage problems. Mark agreed very reluctantly to go to counselling which helped us to start talking.

A couple of years later we were invited to join a group studying what the Bible had to say about marriage. Mark said: “I’d rather go to the dentist!” But we liked the people who had invited us and the evening included dinner so he agreed to give it a try.

We were hooked after the first night! We were a group of five couples who laughed a lot as we journeyed together learning about many things: communicating more honestly and deeply, expressing love in ways that the other person needs it, forgiving one another, resolving conflict and more. Crucially we grew a new ‘vision’ for our marriage: an intimate relationship where we are stronger together than apart with God at the heart of it.

Someone once said: “a good marriage doesn’t happen by accident” and that is definitely true for us. Gradually our marriage started to change as we were intentional and applied the new things we learned. As I look back now I can honestly say that our relationship has been transformed. Mark has become my rock and he would say that I am his rock too.

I feel very sad for Sheryl Sandberg, and anyone who loses a partner so suddenly and unexpectedly. Sheryl said: “Dave and I did not get nearly enough time together. But as heartbroken as I am today, I am equally grateful … I am grateful for every minute we had.”

If your marriage is a good one then be thankful. Why not tell your other half what you value about your relationship… and about him or her.

If your relationship is less solid rock and more like gravel, then why not do something to make your marriage better. We are living proof that you can turn things around.

Whatever your circumstance, why not invest in the most precious thing you have: your relationship …because, as they say, it’s worth it!

Two ideas from FamilyLife UK for investing in your relationship: