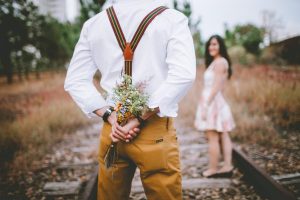 Richard and Maria Kane kicked off Marriage Week in 1997, a whole 20 years ago! Richard describes how the project came about. “I had a friend who had separated from his wife and I asked him what happened? Were they having lots of arguments, was there someone else? My friend said ‘no, we just drifted apart’. ”

Richard states he personally felt this was ‘tragic’. He describes his sadness at seeing how his friends, although they had had a big day and made promises to each other in front of their loved ones, had somehow forgotten why they fell in love in the first place.

So, what’s the big idea?

The whole idea of National Marriage Week is getting alongside those couples who have decided to commit to one another in marriage and say to them ‘how can we support you in that?’ This year for their 20th anniversary, the guys at Marriage week are encouraging us all to ‘Make a Date’.

Dave Percival, coordinator at Marriage Week says “We are also encouraging everyone, whether in a relationship or not, to show their support for any couples they know by offering to babysit, pet sit, etc for them to have a date.”

So, why not ‘Make a Date’ with your partner? Here’s a bunch of date ideas:

Or if you run a business you could hold a “Go home to your spouse” evening when you encourage all employees to make time for their families and loved ones.

Richard Kane says all he’s really after is for ‘the nation to be reminded that if they are lucky enough to be in a marriage, they should look after it.” If that’s something you haven’t thought of recently, maybe marriage week is a time you can make a change?

Now I’ve shared my thoughts, I’m wondering what the best date is. that you have ever been on? Maybe you could recreate it during this year’s Marriage Week? It’s all happening 7th-14th Feb