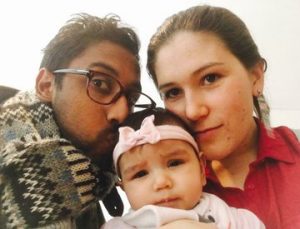 Sean and Miriam have been married for five years, they have one daughter, Sophie and live in North London. They trained to be facilitators for A Day Together in April last year and they are speaking at their first event in Worthing on May 20th. I caught up with them to hear about their involvement in Familylife and the impact on their own relationship.

How did you hear about Familylife?

A friend of ours invited us to ‘A Day Together’ and we loved it! We decided to go along every year as an MOT for our marriage, so that even if we felt everything was fine, we had a forum to be honest and open with each other about issues we normally don’t have time to discuss.  We wanted to get involved because we feel the painful impact of broken marriage in our family, church and wider society. We feel passionate about investing in and promoting marriage.

How has being involved with Familylife changed your relationship?

The biggest difference is that we’re more aware of ourselves and our communication with each other. We understand what helps and hinders an argument and we are starting to learn to use each other’s love languages to express love. For example, Sean loves receiving gifts, so used to buy Miriam lots of special presents and felt hurt when she didn’t seem overly enthusiastic about them. We learnt on A Day Together that actually Miriam would much prefer the gift of an experience or time together, so Sean has adapted his approach.

What’s the best thing about being involved with Familylife?

We both come from broken families with parents who are separated, so we love connecting with more experienced couples. It great to learn from their example of a real, honest, loving marriage. It’s also encouraging to see that marriage can work.

Are you nervous about being the ones doing the talking instead of the listening at A Day Together Worthing?

We’re excited about having the opportunity to share our experiences, both mistakes and successes, with others.  It can feel a bit nerve racking to talk so openly in front of people we’ve never met, but we have really benefited from other couples’ honest stories at A Day Together in previous years, and we’re hoping others will be encouraged by what we have to share.

Anything else to add?

When we first got married, everyone asked us that age old question “How’s married life?” and we felt our response always needed to be “amazing” “lovely” “wonderful”.  If we hinted that we also found it hard work sometimes, we were often met with a concerned or confused face.  Since we started getting involved with Familylife, it’s opened up several conversations with other couples about why marriage doesn’t automatically work. Our openness on this subject has meant several couples have turned to us when they realise marriage isn’t just plain sailing. They know we won’t judge them for struggling because it’s normal that couples have highs and lows on their journey of marriage.