Negin grew up in a Muslim family in Iran. Her father died when she was thirteen, she was lonely and life was hard. At twenty- 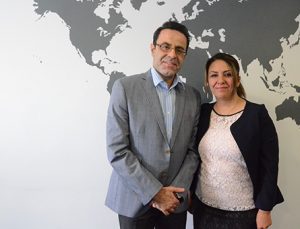 seven she left everything and everyone she knew and went to Germany because of an arranged marriage. After two months of married life, her husband left.

Negin recalls: “I was shocked, deeply rejected and didn’t know what to do next. My brother who lives in London asked me to come to the UK and claim asylum.

I arrived in the UK in 2006. I was hopeless, depressed and lonely for a few months, and then I met some Iranians from Agapé on a bus, inviting me to come to church. That was a divine moment, as I was searching for hope and a place for comfort.”

Kia also had a dramatic entry to the UK, travelling illegally underneath a lorry.

“When I arrived in the UK in 1999, I claimed asylum and told lies to the government. I hid my true identity, which was painful and difficult. I attended a church to gain knowledge about Christianity in order to support my asylum application, but what I learned changed my life completely.

In 2000 I received a revelation from Jesus. He asked me to trust in Him fully and said He would set me free from my sin. He offered me my true identity and a future, which was going to glorify God. Through His teaching I understood that I could lie to anyone but not Him. Jesus was offering me the freedom that I was looking for.  His teaching and character changed my life. I repented from my sin and made my decision to follow Him.

At the end of 2000, I wrote a letter to the government saying that I was a liar. I told them my true life-story and waited for their response. After two weeks they allowed me to stay in the UK as a refugee. That was a miracle. Jesus not only showed me His grace but also gave me a purpose to live.

I started coming to the Iranian church. The Word of God and teaching of Jesus Christ changed my life completely. I repented and gave my life to the Lord. ”

Kia joined the staff of Agape in 2003. He met Negin at church and the couple was married in 2010. Three years later their son Ryan was born and in 2014 the couple were granted refugee status.

Negin has a passion to help families. “God gave me His love and compassion towards women and couples from Iran. I have a desire to introduce Jesus to them, as I experienced hopelessness and rejection in my first marriage, I want to help others to have a Godly marriage.”

Kia explains: “Initially we ministered to those who needed help to cope with life in a new country and who needed the Lord Jesus Christ. Now as we are married for eight years, and we have seen first hand the pressures that married life brings. We have seen lots of Iranian couples struggling in their relationship, even in our home church in Birmingham. However, there do not seem to be many people or Farsi resources available to help them.

FamilyLife UK has developed some excellent teaching and training resources (like, A Day Together seminars, the Together discipleship material, and the Toucan app for couples wanting to work on strengthening their relationship). Over the past two years, God has been confirming to us that NOW is the time to HELP Iranian couples in their marriage. We would like to translate and bring these resources to all Iranians.

We want to see each family of Iranian couples receive this teaching in Farsi and be blessed in their marriage. We can see their pains and want to bring Jesus’s healing to them.”

This summer the family has moved from Birmingham to Manchester, seeing the city as a strategic place to begin a national ministry.

It’s great to see Kia and Negin bringing their experience, passion and drive to this new area of FamilyLife ministry. It will also be exciting to follow the story of how God will continue to work in and through them.