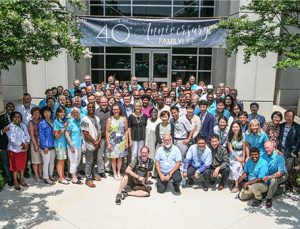 Family life is serious in Nigeria because violence within marriage is widespread. Stepping up to the challenge Ademola and Ajoke and their team are bringing hope and help, working in two cities. In the Philippines Albert and Marife are seeing whole mountain tribes being helped using the HomeBuilder resource. In Kenya the FamilyLife team work with business people one day and are in the slums the next.

This summer the FamilyLife UK team gathered with more than 70 global partners from over 20 countries at FamilyLife’s HQ in the USA. We were joined by hundreds of friends from across the United States  for their 40th anniversary celebrations. We heard many inspiring stories and passionate speakers.

Families lie at the heart of societies. “Without stable families you can’t have stable societies,” said Albert Mohler. Many FamilyLife partners from around the world are motivated to make a difference in their countries. However, most are working because they have experienced transformation themselves and just want to pass that on.

FamilyLife leaders, Russel and Joelle from Trinidad and Tobago told us: “transformation began with a gift voucher to a Weekend to Remember.” They shared their own moving story of a marriage restored after an affair. They now help thousands of couples in their country.

FamilyLife’s roots lie in a desire to support the marriages of the staff of CRU, the worldwide Christian missions organisation. Soon churches began asking for their resources and the ripples spread across the United States. Now 40 years on there are FamilyLife partners in over 109 countries passionate to help others of all faiths and none.

From Guatemala to China; Canada to New Zealand; South Africa to Germany people are working to strengthen families across the globe. The ripples of transformed marriages and families are definitely worth celebrating.