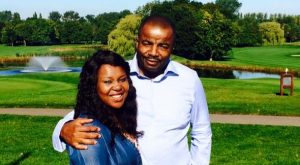 Rumbi and Muchada, thank you for taking time to chat to us. Can you start by telling us a bit about yourselves?

What do you both enjoy doing together?

R. We like to play games, card games or monopoly and we also have been known to binge watch on Netflix.

And what are some of your differences?

R. We live life at difference paces Muchada likes to plan things and I like to be spontaneous. M. It can cause conflict in our home that we are so difference in how we operate.

You moved from Zimbabwe to the UK in 1998, what was that like?

R. It was hard, it was so cold here and I felt very isolated. Initially the plan was that Muchada would come and study in the UK but when he was here, he was unwell and had to return to Zimbabwe. It was then that the family got together and decided that I should come to the UK with Muchada to support him. The only problem was we had a 9 month old son. The family decided that he should stay behind to be cared for my mother-in-law and that was really difficult. He was so young and I was still breastfeeding, I even breastfeed him at the airport before we got on the plane.
M. It is tradition in our culture for the family to make decisions as a group, not just our parents but aunties and uncles come together and try to decide what to do about a situation. Our views were taken into account, but they weren’t the main influencing factor. This was the most difficult time in our marriage. I was pleased that Rumbi was going to be with me in the UK, but I knew how difficult this was for her. Rumbi wasn’t able to use her law qualifications in the UK and had to get any job she could, she even worked as a cleaner. Although I was glad she was with me, I carried a lot of guilt as I knew her suffering and sacrifice was because of me. It caused so much tension and frustration in our marriage and we spend a lot of time arguing, screaming and shouting at each other.

That sounds really difficult. How did things start to get better?

M. We stayed with a family when we moved to the UK, they were Christians and they prayed together each night. After a while we started to pray together too about our problems and the job situation. Things changed when we started to depend on God more, we were fighting less and we started to see our prayers answered. We moved to Coventry and Rumbi started working for the Law society, I was working in a secondary school and things started to turn around.
R. We both grew up Catholics, so had a faith but when we came to the UK we were under such pressure, that was when we turned to God to help us and we are so thankful that he did. 9 months later we were reunited with our son.

Rumbi and Muchada are a valued part of the Familylife team and speak at A Day Together events, sharing stories of their upbringing in Zimbabwe and their life in the UK.