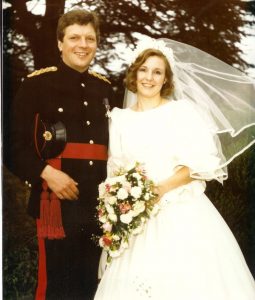 The fact that we’re still married after 32 years is a miracle.
I used to be in the Army, we were well trained and prepared for the job. We learned tactics, how to communicate, how to work together, how to map-read, shoot guns, build things and blow things up. After I left the Army I went into high-tech sales. There I got to learn all about the products we were selling and how to work in teams to run tricky campaigns with difficult customers.

I got married when I was 25. I didn’t understand women and I knew very little about how to make relationships work. Of course, it was easy to start with because we were all over each other, totally in love. Then as things cooled down we started taking each other for granted, work and kids took so much attention. We had a variety of affairs; there was the work affair, the kids affair, the gadgets affair…. We filled the gap that was growing between us with other ‘stuff’. We grew apart, we were both so unhappy, we almost split up.
With a bit of help I realised that for years I’d been complacent and I needed to change… to fight for and protect our marriage. The trouble is I had no idea how…. you see I hadn’t been trained. Give me a task at work – no problem. But the task of fixing my marriage seemed beyond me.

Then a friend invited me to join a ‘couples discipleship group’, which looked at what the Bible says about marriage and relationships. I said I’d rather go to the dentist. I was fearful of stirring up a can of worms and of being embarrassed. Somehow I had sufficient courage to overcome my fear and we joined.

Life began to change. At last I was receiving the training I needed to be a more effective husband and father. I learned how to communicate, to resolve conflict and be emotionally intimate. As I was equipped I was able to move onto the front foot and advance, instead of being on the back foot and retreating. I learned about the meaning of marriage and my role as the husband. I had a clearer sense of direction and purpose. I recognised ‘my partner is not my enemy’ and it transformed the way we worked through our differences. The two of us started to work as a team …. We began to laugh again and our sex life blossomed. We continued our training by attending events for couples who want to invest in their relationships. We’ve had to endure tough times too; redundancy, a child with cancer, depression, parents dying. Tough times come to all of us and can be the end of a relationship unless we know how to respond. Training really helps!

Now I’m nearly 60 but I still meet up with a couple of friends and we discuss our marriages and what we are doing to invest our relationships. We’ve been doing it for nearly 12 years, it is very intentional, challenging and helpful. I’ve got so much out of these meetings (and so has our marriage) So the training has continued and life on the back foot is more a thing of the past.

When I look back I wish I had been better prepared for marriage. If I had only known what I know now I could have been ready and responded differently. I’m so grateful to the brave man who asked me to join that couples group. I am grateful that my courage was larger than my fear. I am grateful that I’ve learned to be more intentional.
How are you doing? I hope you don’t make all the mistakes I did.