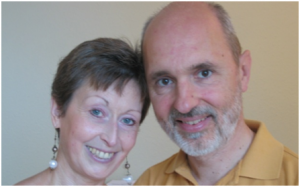 Sally shares her story of struggling to conceive, the longings, questions and emotions she and husband, Graham, experienced. She explains how she wrestled with God but how ultimately her Christian faith helped her to find unexpected ‘blessings’ in their married life.

Graham and I met twenty seven years ago when we were in our early thirties. I was really impressed by Graham’s gentle and sensitive manner, and he seemed to take a genuine interest in people. We seemed to connect well. Graham seemed to think I had a good humoured take on life, along with some compassion and I liked his dark brown velvety eyes!

Anyway, our story went on from there. Although Graham went to church, he wasn’t sure of his faith, and we both felt it was right to not commit to marriage while this was the case. We married in 1994, after God and Graham had worked things out between them!

By then we were in our late thirties, so we decided we didn’t want to hang around before starting a family. After a year or so of trying for a baby, it became apparent that things were not going to be easy as we hoped. Graham dealt with it by seeing it as an obstacle course that we were going through together. I felt God was being somewhat unfair. We had faithfully waited to get married so we could be sure it was right, and now this! Following a range of tests, it transpired that both my fallopian tubes were blocked, and that IVF was the only way forward.

IVF was a huge financial and emotional commitment. Having prayed we set a limit of three rounds of IVF, and said to God that if he hadn’t given us a baby by then, we would take the answer to our request for a baby to be “no”. We believed that he could overcome all the barriers, and could heal me and give us a baby naturally, or through IVF. We had other couples in our church that had had to wait for a baby, but in each case, God had answered their prayers, and I hoped he would do the same for us.

The first two rounds of IVF failed. Each time was a huge bereavement. Initially I felt numb. Then I felt guilty that I couldn’t give Graham any children. I felt as if I should be able to do something about it. Then I felt sad and confused, after all, the bible says children are a blessing from God, so what’s wrong with me? What have I done wrong? Why doesn’t God tell me so I can fix it?

Graham felt his role (although he didn’t verbalise it to me at the time) was to be a strong shoulder for me to cry on, so he shut his own emotions out.

Our final attempt at IVF looked more hopeful, but ended in a very early miscarriage. After my initial feelings of intense sadness, (which I tried not to show Graham as I didn’t want him to feel worse), I stuffed my feelings aside and tried to rationalise things and just carry on. Graham, having been practised at shutting out his emotions so he could be strong, just felt numb.

It wasn’t until some months later, when there was another emotional event – the death of our much loved cat – that he was finally able to grieve. He recognised that the reaction to our cats death was much bigger than he’d expected, and he realised he was also grieving the loss of the child he had never had. I knew he wasn’t blaming me, and I knew he loved me, he was just grieving, and he needed to express it. It was healthy that he did.
We didn’t share our pain with many other people. Partly because no one could fix it and partly because we found that people didn’t really know how to respond. I didn’t want to hear that Sarah and Abraham had a baby in their old age. I didn’t want to hear that God answered Hannah when she cried out to him, so maybe I needed to cry out a bit more. I didn’t want to hear that we would have more time to serve God without a family, (as if looking after a family isn’t serving God!) or that he must have something special for us instead. I also didn’t want to hear other people’s opinions about IVF.

All I wanted was for someone to listen and accept how sad I felt about our hopes coming to an end. It felt as though someone had just ripped a whole section of the life cycle from under our feet, and fast forwarded our life, and I didn’t know what to do, or what direction our life would have now. I felt sad about not being a mother, but even worse about Graham not having the opportunity to be a father.

Shortly after the last IVF failure, I was at a local church meeting, and someone from another church who I trusted as someone who listened prayerfully to God but who knew nothing of my recent experience came over to me and said: “I think God wants me to tell you that he knows you are sad and upset and disappointed. He knows you are angry and he knows you are confused, and he wants you to know that he hasn’t taken himself from you.” That was such a release for me. Here was God saying that he was the person who knows what I was feeling, even better than me! He would listen to me, and he was reassuring me of his presence.

Over the weeks that came, I was able to pour out all my underlying feelings of deep sadness, and pain, despondency and anger to him, and I felt him comfort me. Graham never doubted God was with us in this. We both believe he has given us the resources to cope with it. I never stopped trusting in God, and I did still believe he loved me, but I had a whole lot of questions for him, mainly “why?”

Now, twenty years on, we still don’t know why God chose this path for us, but he did. We do know that he is the Father who is able to sustain us in all things, who strengthens us and comforts us. We also know that children are A blessing, but not the only blessing, and that blessings come in many forms, and in unexpected places.

Graham and I have found a blessing in the time that we have had available for each other. We have learnt that sharing experiences together, and being able to grieve together brings closeness. We have also found that God has given us experiences and grown us in a way that would not have happened had we had children. We did not have to live within the conventions that having a family brings. Graham learnt to fly and gained his private pilot’s licence for example. Not something he would have done had we had a family.

One of the difficulties in the earlier years, when lots of our friends had a young family, was that there interests and priorities were different from ours. However, now their nests are emptying, there is more common ground again. The loss of a family is something that will always be a part of our life, a grief we will always carry, and we don’t want to deny the reality of that. Graham says that the next challenge he faces is the loss of grandchildren. Either of us, at different times, might feel that loss keenly, but as well as that, we have a life that contains fun and challenge and fulfilment. For me, I must admit, there are times when I’m actually relieved we don’t have grandchildren descending on us! Certainly, we have been spared the stresses that children can bring, and which can challenge a couple’s closeness.

We have both learnt that life doesn’t necessarily follow the script we expected or hoped for, and sometimes we don’t have answers to our questions, but that is doesn’t take away from our value, or purpose.

IVF, God, grief and advice for friends of childless couples.

Initially, when we were facing treatment choices, we found it invaluable to have help from Christian counsellors who could help us with the ethical boundaries of treatment, and how to determine them, and we would encourage others in a similar situation to do the same, rather than taking on board lots of well meaning, but ill-informed advice which becomes confusing. Think carefully and honestly about each step, pray, and ask God to open the doors that he wants to open. If you are ultimately unsuccessful, you will look back and know that you tried the doors and God kept them closed, according to his purpose, but you did everything you could.

Be honest with God, and each other about how you feel. You may both be in different places at different times in the process, and that’s ok. Men and women often deal with grief differently. Also, take time to have fun.

For those who have children, resist thinking you know how a childless couple feel. Each person has their own journey. My journey is mine. Another person in the same situation might have a different journey. If you have your own children, be willing to spend time with childless friends doing things that are not child centred.

Don’t pry into their situation, or offer advice, or platitudes, but if they want to talk about it, just listen and accept how they feel and where they are at. Ask them if there is anything you can pray for them. Hearing other people’s pain can be difficult, we often want to try and fix it. We can’t, but we can listen.

Finally, don’t feel guilty about the fact that you have children. They are one of your blessings!

Finally I would like to share with you with some of my favourite verses in scripture: “Whenever the day came for Elkanah to sacrifice, he would give portions of meat to his wife Peninnah, and to all her sons and daughters, but to Hannah, he gave a double portion because he loved her, and the Lord had closed her womb.” (1 Samuel 1: 4-5.)

What love and grace. Marvellous!