‘No!’ the kids protested. ‘Not the oysters-for-breakfast book again!’ 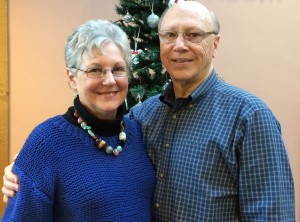 It was Christmas eve. Our family tradition insisted that this O Holy Night was for Jesus – a time to sing about his birth and read the familiar story and pray. For years we’d used selections from Our Christmas Story by Mrs. Billy Graham, which lays out the whole plan of God from creation to Saviour. ‘Do you ever have oysters for breakfast?’ it begins.

I admit, we had far too many Christmas traditions back then. When we married, Roger was a widower with a seven-year-old daughter, and I was eager to imprint my own creativity on the family. We moved from the US to Germany, had two more kids, attended a Lutheran church. The tradition of lighting advent candles each week leading up to Christmas was a lovely one, and we quickly added it to our repertoire.

A family trip to the local village Christmas market was a highlight, with everyone whispering and giggling as they spent pocket money on the perfect gifts. On the sixth of December we set out empty boots for Nikolaus to fill. We baked lebkuechen and Linzertorte and sugar cookies and date braid. On Christmas eve we had a birthday party for Baby Jesus with sparklers on the cake, then unwrapped one and only one present. Christmas day included tradition-studded meal, a combination of German, American and later British elements.

Whew. I’m tired just thinking about it. Over the years various things have dropped off. We stopped reading the ‘oysters’ book in favour of reading the story from the Bible. Date braid was something only Dad ate, so we gave it up. Yet even though we may have overdone it, keeping Christmas traditions tightened our family bonds, making the time special.

We’ve held onto many habits such as lighting advent candles. It’s a way to focus our hearts, close our ears to the cries of ‘buy-this-buy-this!’ We still keep the Holy Night as a time to think about Jesus and his birth and what he’s done for us. And we still open that one present afterwards.

In our culture we seem to have fallen into a parallel Narnian universe in which it’s always Christmas but never winter. It starts earlier and earlier – I fully expect eventually the shopkeepers won’t bother putting Christmas stuff away and there will be a new John Lewis TV advert every month.

But Christmas is (or should be) a holy moment – a God point where time and eternity touch hands, sparking a flare in the gathering darkness. Whether single or married, with kids or without, let’s build some Christmas traditions – more than mince pie and telly. Let’s set up barricades against the tide of consumer culture and instead of saying ‘Humbug!’ to Christmas, let’s say ‘Holy. Holy. Holy. God is with us. Worship him together.’