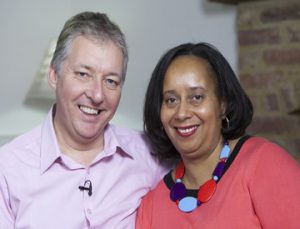 If you joined us for Sunday lunch, you may be a little surprised. Alongside the roast beef, yorkshire puddings and roast potatoes you may well find some rice ‘n’ peas and fried plantain. It’s one of the most delightful aspects of being married to Maria, whose parents are Jamaican. But it has taken a bit of getting used to. One time Maria put the dried kidney beans (yes, it’s confusing, they are called ‘peas’ but really they are ‘kidney beans’) in the water, overnight, to soak. Then early on the Sunday morning she had put them on the hob to boil. A while later she asked me to turn them off, which I did, and drained them too. Alas, the rice in ‘rice ‘n’ peas’ gains its lovely reddish tint from the water from the beans which, in my case, had sadly gone down the drain. Maria was not best pleased.

In fact, the whole preparation of food was very different. No Jamaican would dream of cooking meat until it had been cleaned with vinegar, washed with lemon and seasoned with onion, garlic and pepper. And then left to cook for a very long time.

We have been fortunate because despite coming from very different cultural backgrounds, mine a north-eastern working class culture, Maria’s a Jamaican immigrant culture, we actually had much in common. Both sets of parents worked hard and saved hard to buy their own houses, both of us grew up with little spare money in the family home, both of us came from close families where everyone talked at once and both of us came from cultures where poking fun at each other was a form of endearment.

Listening and trying to understand each other’s stories has been an important part of growing together. Maria would tell me of the racism she experienced at school, at work and even at church. I would try to explain what it was like growing up under brutal industrial decline in the north-east of England, as unemployment soared and people stole from their neighbours. She would tell me to watch the seminal drama ‘Roots’, and I would persuade her to watch the collapse of a community in the film ‘Brassed Off’.

Our daughter Anna has, fortunately, taken on Maria’s beautiful smile and with her skin tones being closer to her mother’s she looks more naturally her daughter than mine. I remember when she was three years old, standing with her outside a department store in Switzerland while Maria browsed for clothes, when Anna began to scream for her mum. I suddenly had this dreadful thought that people would think she was not my child and I quickly went to find Maria in the store before someone called the police. Although you get to a stage where you no longer think of your wife or child having different coloured skin, you are reminded from time to time that others have clocked it (maybe a look, maybe something they say) and may form stereotypes or prejudices as a result.

So after sixteen years together Maria can produce the perfect yorkshire pudding and I’ve learnt not to throw away the water from the ‘peas’. We’ve become familiar with each others’ journeys and stories and we enjoy making our home a place where others can tell their stories too. I asked Anna how she describes herself to others, she said, ‘I say I am mixed’. I asked her, ‘how do you feel about it?’ and she said, ‘I like it, that I have a bit of Hartlepool and a bit of Jamaica’. We like it too.